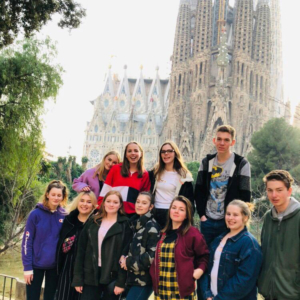 Last weekend Year 12 Spanish students travelled to Barcelona for a weekend of culture and language.

On their first day in the city students visited the FC Barcelona Museum and toured the famous Nou Camp Stadium.  Other highlights of the weekend were the Modern Art museum, the Olympic Park and the Poble Espanyol, a museum honouring the 17 different Spanish regions and their various architectural styles and cultures. On Saturday evening the group visited the Sagrada Familia and learned about the meaning behind some of the beautiful architectural elements.

On their final day the students went into the centre to celebrate Barcelona’s biggest annual festival ‘Festes de Santa Eulàlia‘ where they witnessed the display of ‘castellers’ by each of the local groups. The students then had time to buy last minute souvenirs before heading to the Barceloneta beach – Barcelona’s man-made beach, with sand imported from Egypt!